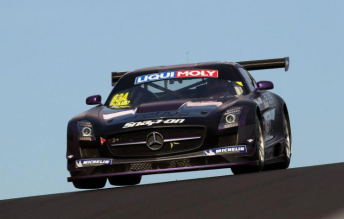 Erebus Motorsport #63 Mercedes has secured pole position for Sunday’s Liqui-Moly Barthurst 12 Hour despite not taking to the track in the second qualifying session.

The driving crew of Lee Holdsworth, Tim Slade and Peter Hackett watched from the pitlane as the 30 minutes unfolded, with none of their rivals able to make an impression on Holdsworth’s 2:06.27s morning effort as track temperatures soared towards 60 degrees.

The top end of the grid remains unchanged from the morning, with the #88 Maranello Ferrari set to start on the outside of the front-row.

Having been slugged with a 50kg weight penalty for breaking the 2:06.0s benchmark time in Qualifying 1, Maranello’s tough day continued when John Bowe made light contact with the #51 IMAK Mosler late in the second session.

Matt Griffin set the quickest lap in Qualifying 2, clocking a relatively sedate 2:07.79s on his first flying lap in the  #33 Clearwater Ferrari. The Malaysian entry will start third thanks to its time from this morning.

Klark Quinn set the second quickest Qualifying 2 time in the #5 VIP Porsche, setting a 2:09.02s after taking over from co-driver Shane van Gisbergen.

It was a difficult second session for the #69 Motorsport Services Porsche, which spent most of the 30 minutes in the pitlane with smoke emanating from its exhaust.

The #29 Trofeo Corvette meanwhile failed to take to the track following its Qualifying 1 accident in the hands of Greg Murphy, but is expected to be fixed in time for tomorrow’s 0700 start.