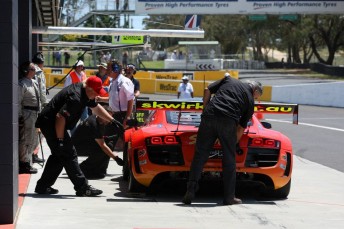 The Maranello Motorsport Ferrari and Melbourne Performance Centre Audi crews are confident of making strong bids for victory in Sunday’s Liqui-Moly Bathurst 12 Hour despite a less than smooth qualifying day.

The Allan Simonsen/Mika Salo/John Bowe/Peter Edwards Maranello entry was stripped of its fastest qualifying time and handed a 50kg penalty this morning after Simonsen broke the 2:06.0s benchmark time in Qualifying 1.

A clash between Bowe and the IMAK Mosler late in the second session proved a further set-back for the team, forcing an afternoon of repairs to the 458’s right-front corner.

“We didn’t have any predictive timer in the car during the session,” car owner Peter Edwards said of Simonsen’s infraction.

“We weren’t sure exactly where the mark was and we got caught. For sure it’s not ideal, but we were actually heavier as a minimum weight in the car last year even with the 50kg (due to changes in the Balance of Performance regulations since the 2012 race), so it shouldn’t be too big a drama.”

Despite the issues, the Maranello entry will share the front-row with the pole-sitting #63 Erebus Mercedes.

The MPC Audis of Christopher Mies/Mark Eddy/Dean Grant/Marc Cini  and Craig Lowndes/Warren Luff/Rod Salmon were both expected to contend for the top placings in qualifying, but will start just fifth and 12th respectively.

The former’s day started with an electrical issue stranding Mies on the circuit during the opening minutes of qualifying, while the latter car’s effort was heavily hampered by traffic.

The team also found itself needing to complete unexpected gearbox repairs to the Lowndes/Luff/Salmon car between the qualifying sessions, but is confident of putting together a strong 12 Hour campaign.

“Twelfth isn’t where we wanted to be, we were expecting to be in the top six,” said Lowndes after Qualifying 2.

“We are disappointed, but it’s very difficult to get a clear lap around this circuit, especially with so many cars. We know the car is so much better than where we’re starting.”

The squad has concentrated on giving car owner Rod Salmon maximum laps in the lead-up to the race, with the speed of the non-seeded driver having largely determined the winner since the Pro-Am rules were introduced with the GT format in 2010.

“The car is perfect, and I think we’re pretty well placed, but anything can happen across 12-Hours.”

See below for raw onboard footage on Simonsen’s 2:05.49s qualifying lap