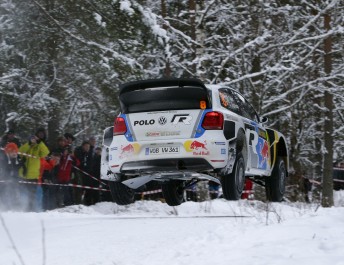 Sebastien Ogier has showed the Volkswagen is very much the real deal in the World Rally Championship by setting fastest time on the Rally Sweden Qualifying Stage.

“I couldn’t expect any better, so I’m happy with that for sure,” Ogier told wrc.com.

“It’s a good start and in these conditions it means a lot to have first choice of starting position.”

The result means that Ogier was able to choose his starting position on road for Friday’s first full day of the rally. With deep snow expected on the stages he choose 17th to make the most of the others in front sweeping the roads. In fact the entire group of seeded entries followed his lead when choosing.

Ostberg was pleased to be second quickest.

“I wanted to do a good qualifying but I didn’t want to win either, so second was the best position I could have,” said Ostberg

“I’m quite happy, maybe a bit surprised how fast Ogier was, but it’s OK and we can still choose a good road position,” said the Finn.

Conditions were cold and bright for the session, with light snowfall and a temperature of -5C. The cars started in championship order, meaning Citroen driver Sebastien Loeb went first. The nine-time world champion was eighth.

Video highlights from the qualifying stage