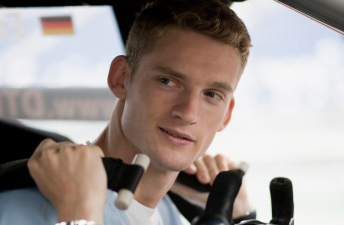 Erebus Motorsport drivers Lee Holdsworth and Tim Slade are hoping that a speedy transition to V8 Supercars for new team-mate Maro Engel will help the development of the squad’s Mercedes-Benz entry.

The Gold Coast-based team is currently working hard to make up for lost time after putting its first E63 AMG on the track more than four months after category pace-setters Triple Eight and Ford Performance Racing began testing their first Car of the Future machinery.

The shakedown of Erebus’ second car was hampered by a failure-induced incident earlier this week. CLICK HERE for more.

The 26-year-old Engel, whose appointment as Erebus’ third driver was confirmed yesterday, enters V8 Supercars following an international career that included four seasons with Mercedes in the DTM.

His move to Australia comes 12 months after fellow former DTM driver Alex Premat attempted a similar transition that saw the Frenchman finish last of the full-time drivers in the 2012 points standings.

Although the shift to a bigger wheel and tyre package, independent rear suspension and an improved weight distribution under the COTF rules should theoretically make Engel’s move easier, continued use of a locked differential and a 1400kg kerb weight ensure the cars have retained many of their relatively unique characteristics.

Holdsworth worked alongside Engel when the German tested the former’s previous-generation IRWIN Ford Falcon last December, and was left optimistic that the newcomer will be able to add greatly to the Mercedes development program.

“With the challenge we’ve got in front of us to get this car up to speed we need three drivers working together to develop this car as quick as we can,” Holdsworth told Speedcafe.com of Engel’s arrival in the team.

“We started this program fairly late so we’re obviously a bit behind the eight-ball compared to the people that have been testing since mid last year.

“Maro will have to learn the tracks, which will be the hardest part, and I’m sure the car will be fairly different to what he’s used to as well, so we’ll need to help him as much as we can.

“But he’s an experienced driver so I think he’ll get on top of it fairly quickly, and anything he can put into this team will be really valuable.

“He knows what he wants in a car and he knows what a good car feels like, so I’m sure he’ll have his own fresh ideas. Tim and I don’t have any experience with cars overseas, so he can be coming in with a different viewpoint and a different thought process on how to get around problems.

“It’ll be really important for all of us to work closely with him and try and help him get up to speed so we can all push to develop the car as quick as we can.”

Added Slade of how quickly Engel will be able to come to terms with the cars: “He’s driven the cars so he knows what to expect… he might go to the first round and be really quick straight away, who knows?

“But if he does need help he’ll have two team-mates there to help him out, as well as his own engineer.

“It’s probably a bit harder (to help him) this year because there’s no data from the previous year and all of us have a bit of a learning curve with the new car. It’s not going to be as straight forward for someone coming in.”

Slade and Holdsworth will team with Peter Hackett as part of a two-car Erebus Motorsport SLS GT3 assault on this weekend’s Liqui-Moly Bathurst 12 Hour.

Engel is expected to arrive at the famed Mount Panorama venue on Saturday, but will not take part in any of the on-track festivities.