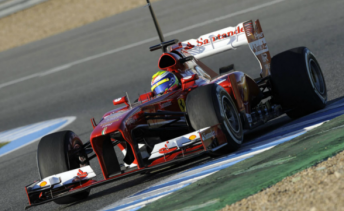 Felipe Massa has put Ferrari on top for the first time in 2013, topping Day 3 of pre-season testing at the Jerez circuit in Spain.

The Brazilian driver set his fastest time in the morning and was not headed by any of his 11 team rivals.

Only Nico Rosberg, driving the repaired Mercedes W04, could get within a second of Massa’s time.

It was relief for Mercedes, who has endured difficult runs on the first two days of testing (electrical issues and brake failure). Rosberg logged 148 laps on Day 3, easily the most of any outfit.

World champion Sebastian Vettel got his first drive of the team’s 2013 car, setting the third fastest time after showing improvement in the afternoon session.