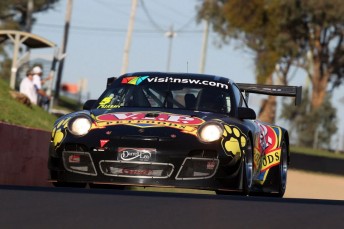 Kiwi V8 Supercars star Shane van Gisbergen has adapted quickly to the Porsche GT3-R that he will drive in Sunday’s Liqui-Moly Bathurst 12 Hour, setting the second fastest time in the second session of the weekend.

The Porsche’s regular driver, Klark Quinn, set the early pace in the 50 minute hit-out before handing over to Van Gisbergen.

The 23-year-old took the best part of half an hour to eclipse Quinn’s best effort, eventually running a 2:10.04s lap with little over five minutes remaining.

Warren Luff subsequently took 0.7s out of Van Gisbergen’s time following the restart from a late red flag. While a timing issue caused short-term confusion, the #6 Skwirk Audi was eventually confirmed at the head of the order.

The #11 JBS Lamborghini and #36 Erebus Mercedes ended up third and fourth respectively after Peter Kox and Thomas Jaeger also broke into the 2:10s bracket late in the going.

Harold Primat’s final effort put the #1 Phoenix Audi in fifth ahead of Tony Quinn’s Aston Martin, which is only contesting the opening 50 minutes of Sunday’s race in order to score Australian GT Championship points. Tony will then jump into the #5 Porsche alongside son Klark and Van Gisbergen for the remainder of the 12 Hour contest.

The Porsche has received a 2013-specificaiton upgrade package since Klark won the AGTC title with it last season, leaving the pet food maker to readjust to the car’s new characteristics.

“The car felt much better in the second session – the upgrade package is taking a bit to get used to,” said Quinn. “The main problem today though has just been getting clean laps in the traffic.”

Several cars have endured mechanical issues during the day so far. Those in trouble have included the #12 Competition Motorsports Porsche, which stopped at the top of the Mountain mid-session after throwing a belt, the #24 GWS BMW, which suffered a turbo fire, and the #80 Beric Lynton BMW, which is battling serious electrical problems.

The third and final practice session of the day will kick-off at 14:30 local time.