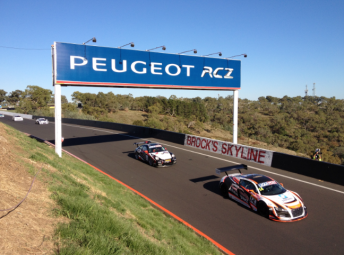 Experienced Australian Steve Richards set the pace for much of the 50 minute hit-out before late efforts from Mies (#9 Network Clothing Audi) and Matt Griffin (#33 Clearwater Ferrari) dropped the #48 GB Galvanizing Lamborghini to third.

Mies’ best time of 2:09.88s was just 0.0026s quicker than that of Griffin, with both drivers enjoying just six laps behind the wheel after leaving the early running to their co-drivers.

Their ultimate pace proved in excess of 1.2s slower than Warren Luff’s best time from the opening session last year.

Mies later reported a positive first experience of the Pirelli tyres that the Melbourne Performance Centre-run Audi campaigns, but is realistic of his race chances given that he’s sharing with gentleman drivers Mark Eddy, Dean Grant and Marc Cini. 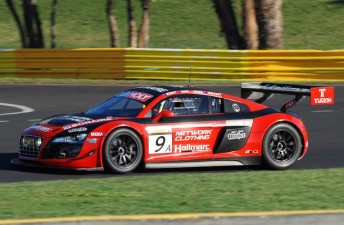 “P1 is always the target but to be honest we have to say that we have three good gentleman drivers, and some of the other cars have professionals, so we’ll see,” said Mies of the race.

“It’s a 12 Hour race. It’s the same as Daytona. We have to stay on the lead lap until the end, then we can fight for the win. It doesn’t matter how your race was before, you just need to be there at the end.”

Practice 1 was punctuated by a single red flag period shortly after its halfway mark, called to retrieve the #67 Motorsport Services Porsche from the circuit after it stopped with overheating issues.

A further two practice sessions will take place today ahead of Saturday’s two-part qualifying. Under rules designed to ensure that the maximum number of cars makes the 130 percent cut-off, no driver may lap below the 2:06.0s benchmark time in practice or qualifying.