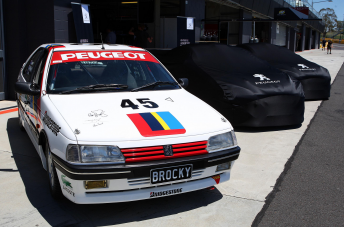 Peugeot Australia has marked its return to the Liqui-Moly Bathurst 12 Hour by paying tribute to its Peter Brock-headlined campaign of 1992.

The French marque’s two RCZ entries for this year’s race were unveiled in the Bathurst circuit’s pitlane today alongside the 405 that Brock shared with Neil Crompton and journalist Paul Gover in the 1992 James Hardie 12 Hour.

The 405 was one of three factory entries in that year’s race, and is now owned by Sports Sedan racer and Peugeot enthusiast, Keith Linnel.

“It was a funny project – I think there were probably more drivers than crew, when we sat down as a group,” said Crompton of the Peugeot team.

“It was the kind of car that you could drive flat out everywhere – it had enormous limitations with brakes and not a lot to adjust but you could just drive the thing flat everywhere. It would do the same lap times every lap, regardless of what you did.”

The highly respected V8 Supercars commentator also added that Brock’s enthusiasm in the early stages of the race proved detrimental to the car’s health. 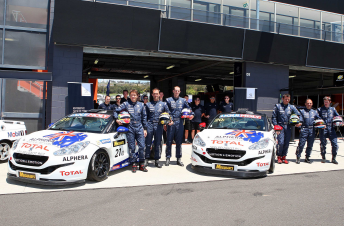 “We knew when we got to Bathurst that we would have to nurse it, because it was basically a road car,” he said.

“In the first section of the race Brock got into a battle with a mate of his – Peter McLeod (who won the 1987 Bathurst 1000 with Brock and David Parsons) who was driving a Citroen. It was a battle of the French cars.

“Anyway, he melted the brakes off the thing. They were a total mess and I jumped in the car when he came in only to spend my time sitting in pit lane while they changed the entire brake system!

“It was classic, old style production car racing. It’s amazing when you stop and think about it, it’s a long period of time ago – but when I close my eyes, it doesn’t seem that long ago.”

Peugeot’s cars in this year’s race will be crewed by Stephane Caillet/Julian Ruefun/Jason Bright and Bruce Jouanny/David Wall/Andrew Jones, and compete in the invitational class.