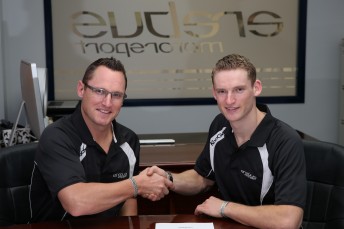 German racer Maro Engel will join the V8 Supercar field after being confirmed as the replacement for Shane van Gisbergen in the #9 SP Tools Racing entry of Erebus Motorsport V8.

It will not be the first time Engel has driven for the organisation having raced for the GT team at Phillip Island in the SLS AMG GT3 in September.

The deal is a multiyear arrangement with the former DTM and AMG sportscar racer. It comes off the back of a successful V8 Supercar test with the team in December.

“In December I tested the 2012 car and it was a great experience. The car was really fun to drive; I had great feedback out on track and heightened my desire to be part of this category,” said Engel.

“We had a really successful and positive test and it was great to work with the engineers. They are a really professional team and it gave me a really good insight into what the V8 Supercars have been like and I think with the changes for this year it’s going to make them even better.

“This year will be a steep learning curve for me, that’s for sure, but I’m really looking forward to learning from my team and team mates. I’m definitely coming over to be successful however I think we have to appreciate that this will take some time.

“This year is an unknown for everybody with new cars and new Car of the Future regulations, so I think we will have to wait and see how things go in the first race to see where we are all positioned.”

Erebus Motorsport V8 CEO Ryan Maddison said the process of filling the car #9 seat was one that was carefully considered.

“Erebus Motorsport V8 has a huge response with offers to drive both full time in car #9 and endurance events, and we are still fielding highly creditable applicants both domestically and internationally,” said Maddison.

“Maro has four years of experience as a Mercedes-Benz factory driver in the DTM series and has produced a number of standout performances including his win with Erebus Motorsport at Phillip Island last year.

“We undertook extensive due diligence on all levels and we believe that Maro’s desire to learn the V8 category, his professionalism and his motivation will strengthen our 2013 driver line-up which includes Lee Holdsworth and Tim Slade.

“The result is that we are entering this year’s V8 Supercars Championship with three drivers who we are not only very experienced, but that are excellent team ambassadors.”

“Maro tested our 2012 spec V8 Supercar back in December and exceeded our expectations, given that a V8 Supercar is so unique to learn to drive in terms of the control tyre and brake package against engine power.

“He adapted to the car very quickly and showed that he had the determination and skill to race in the category. Of course he will have a lot to learn this year, as will every driver getting into a new car of the future,” said Stone.

Engel will be part of the team’s launch event on Thursday 14 February and the official test two days later at Sydney Motorsport Park. He will make his V8 Supercar race debut at the Clipsal 500 on the first weekend of March.