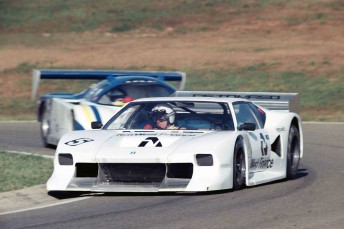 Just six weeks after selling his two V8 Supercar entitlements, Larry Perkins will return to the racetrack for his Historic Racing debut at the 2013 Phillip Island Classic Festival of Motorsport from 8-10 March.

The six-time Bathurst winner will be at the wheel of the spectacular and unique ‘La Pantera Bianca’ DeTomaso GT car built in the mid-1980s by noted Australian racing car designer Barry Lock and raced undefeated by Kevin Bartlett.

The 900kg ground effects Pantera with its 383-cid mid-mounted Ford V8 engine developing 612HP (456kW), will be amongst a full grid of exotic ‘big banger’ sports cars from around the world competing in the International Sportscar Challenge at the meeting. In the hands of Kevin Bartlett the La Pantera Bianca was a weapon. PIC: Autopics.com.au

The field includes nine Lolas, eight McLarens, four Elfins, two Le Mans Matra-Simca MS670s, three Porsches and a 1966 Ford GT40, with 10 entrants coming from the USA, seven from the UK, two from Germany and New Zealand and the rest from Australia

The cars will take part in two rolling start sprint races on the Saturday of the Phillip Island Classic weekend and a 30-minute mini enduro as the feature event of the Sunday race program.

While Perkins will be coming out of a decade of racing ‘hibernation’, the Pantera will be emerging from nearly 27 years in storage.

“I’m helping a friend of mine out and having a drive,” said a tongue-in-cheek Perkins.

Back in 1984, Paul Halstead’s company, DeTomaso Australia, exported Australian-made 351 Cleveland V8s to Italy for the worldwide production of DeTomaso cars. As a result of the export credits earned, DeTomaso Australia was able to import the range of vehicles in knocked-down form at reduced duty.

In 1985, Halstead ordered a lightweight body from the Italian factory as the basis of a car to run in the Australian GT Championship and designer Barry Lock (formerly of McLaren and the designer of the Australian Kaditcha sports cars) subsequently built a full ‘ground effects’ car using the world’s best available technology.

Called ‘La Pantera Bianca’, or ‘White Panther’ and standing just 96cm tall – even lower than the 100cm Ford GT40 – the Pantera in its first part-year of racing with twice Australian Drivers’ Champion Kevin Bartlett at the wheel won every race it contested.

In its final GT championship race at Winton Victoria, Bartlett, in just his fourth start in the car, lapped the entire field of GT and sports cars!

In 1987, as it was preparing to contest the full GT Championship, the regulations changed and rather than mutilate the car to meet the new restrictive rules, Halstead retired the Pantera undefeated

After trying unsuccessfully to sell the car several years ago, Halstead instead decided to totally refurbish it and had Barry Lock complete an exhaustive restoration to its original 1980s specification.

Larry Perkins recently gave the car its shakedown run on the newly-resurfaced Phillip Island circuit and despite his unfamiliarity with the car and its relatively cold tyres, lapped the circuit in under 1min 42sec. Halstead believes that at the ‘Classic Perkins will be circulating closer to 1min 30sec.

“He had a big smile,” said Paul Halstead.

“He’s lost nothing during his 10-year Sabbatical and we’ll see it all with Spades when he drives the car at the Classic!”

While under-playing his return to racing, Perkins said he was looking forward to driving the Pantera at the Phillip Island Classic Festival of Motorsport.