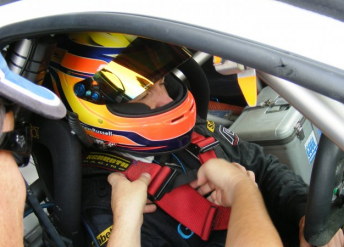 Russell, who like Hunter Motorsports hails from Newcastle, told Speedcafe.com that he’s looking forward to his first foray into GT racing.

“It’s absolutely amazing,” he said of the opportunity to pilot what will likely start as the favourite for Class B honours.

“I haven’t driven anything Porsche related before but I’ve driven various cars around here, such as Commodore Cup, which will help.

“It’s certainly going to be different to what I’m used to but I’m fairly confident I’ll be able to adapt reasonably easily.

“In my view Jonny is one of the best Porsche drivers in the world and Steve has obviously done a lot of laps around here, including in this car last year,” he added of his two highly credentialed co-drivers.

“They’re both going to be able to provide a lot of advice about what I’ll need to do to adapt.”

Although Russell’s family owned team is yet to confirm his entry in this year’s Dunlop Series, the squad is expected to finalise the purchase of a third Ford Falcon FG to run alongside its two ex-Stone Brothers Racing entries in the near future.

“We’re still working as hard as we possibly can to lock stuff down,” he said of the Dunlop Series.

“We’ve got something there that we’re very hopeful of pulling off but as with everything in motorsport it revolves around the dollar.”