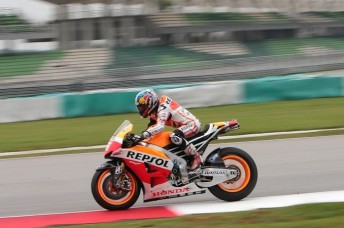 Dani Pedrosa has Honda out front at the Sepang test

Dani Pedrosa has for the second day running set the pace in pre-season MotoGP testing at Sepang in Malaysia,

Pedrosa and his Repsol Honda teammate Marc Márquez (third fastest) worked on the RC213V’s electronics package and both put in impressive times. Over at Yamaha Jorge Lorenzo (second fastest) and Valentino Rossi (Fourth quickest) continued to evaluate the 2013 M1, in a bid to decide which parts are an improvement over last year’s title-winning machine.

“We had planned to try a few more things in the afternoon, like the hard compound tyres, but it started to rain early and we were unable to go out.

“We hope that it is good weather tomorrow so that we can try them out, as in the coming season it will be important to ride fast on that compound. We also hope to continue moving forward with our quest for the best bike setup.”

Tech 3 Yamaha’s Cal Crutchlow was fastest of the non full-factory machines finishing just over seven tenths off the top, whilst LCR Honda MotoGP’s had to deal with health issues Stefan Bradl, but was still next fastest ahead of Honda Gresini’s Álvaro Bautista in seventh.

Tech 3’s Bradley Smith came in just over 1.3s below Pedrosa, with Ducati’s Nicky Hayden and Andrea Dovizioso in tow, as the pair managed to significantly improve their pace from the opening day. Looming just behind were HRC test rider Kosuke Akiyoshi and Yamaha test rider Katsuyuki Nakasuga, who managed to finish ahead of Pramac Racing’s Ben Spies, who not only put in more laps today after shoulder issues, but also upped his pace significantly. Splitting him from his also improved teammate Andrea Iannone was Yamaha test rider Wataru Yoshikawa.

The Power Electronics Aspar pair of Aleix Espargaró and Randy de Puniet led the CRT field once more, as both riders evaluated a new chassis and swingarm, with Came IodaRacing Project’s Danilo Petrucci and HCR test rider Takumi Takahashi in tow. Avintia Blusens’ Hiroshi Aoyama looked to have few ill effects from his broken left wrist as he improved to 20th, ahead of teammate Héctor Barberá, who was working on the electronics and trying to overcome chatter issues.

Track time will resume today at 10am local time.