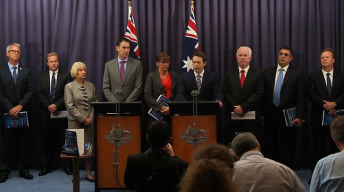 A harder crackdown of performance enhancing drugs and corruption in Australian sport has received support from the Confederation of Australian Motor Sport.

A widespread investigation by the the government probe has uncovered strong evidence of the use of banned substances among multiple athletes and sporting codes, as well as organised crime links including match-fixing.

The 12-month investigation has been conducted by the Australian Crime Commission with its findings released today.

“It’s cheating, but it’s worse than that. It’s cheating with help from criminals,” he said at the press conference this morning.

“Don’t underestimate how much we know.”

CAMS has an Illicit Drugs in Sport Policy and an Anti-Doping Policy, working with the Federal Government on both.

CAMS Chief Executive Eugene Arocca says that his organisation continues to work closely with authorities to stamp out illegal practices.

“We have a drugs policy and an anti-doping policy in place, we are confident in both and our sport is very much aware of the consequences of illicit and performance enhancing drugs,” Arocca said.

“In motorsport in particular, our competitors have an enhanced responsibility given they are in control of competition cars.

“CAMS has even worked with other sporting codes to ensure that our policy is best practice.”

Minister for Sport Kate Lundy outlined a number of new actions that will be brought into play, including the establishment of an integrity unit to police doping, gambling and match-fixing and doubling the Australian Sports Anti-Doping Authority’s resources.

Senator Lundy had a direct message for drug cheats.

See below for news video from today’s press conference.