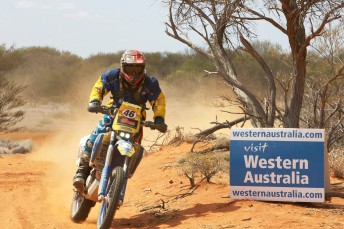 The WA Government has extended support for the Australasian Safari

Australia’s version of the Dakar Rally, the Australasian Safari, has received a boost with the Western Australian Government announcing a two year commitment to the internationally recognised event.

WA Tourism Minister Kim Hames said this year’s event would continue the reputation of the toughest endurance motorsport event in Asia-Pacific region with competitors tackling a challenging course of up to 3,500km through the State’s Coral Coast, Mid-West and Gascoyne regions in four-wheel drives, motorbikes, quad bikes and side-by-sides.

“The Australasian Safari gained significant international coverage last year as it was selected as one of only five motorsport events included in the coveted 2013 Dakar Challenge, enabling the highest-placed motorcycle competitor free entry into the Dakar Rally,” Dr Hames said.

“This highlights the safari’s growing reputation as a world-class motorsport event and promotes WA globally.

“In addition, the Australasian Safari is broadcast nationally and internationally via major sport channels in more than 130 countries, providing valuable exposure of some of the State’s key tourism attractions.”

The Minister said the event attracted not only local and national competitors but also motorsport racing enthusiasts from countries such as the USA, South Africa, the UK, Japan, China, Italy, Venezuela, Thailand and the Netherlands.

“The event organisers hope to once again secure a strong contingent of national and international competitors for the 2013 event,” he said.

“These competitors not only have the chance to race against some of the best, but also have an opportunity to see some of Western Australia’s most breathtaking scenery.”