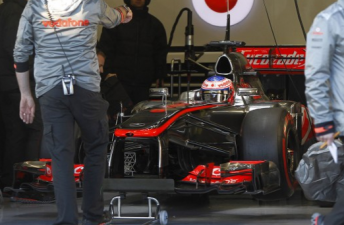 McLaren and Jenson Button have fired the first shot of 2013, topping the times in Formula 1’s official opening test at Jerez.

The 2009 world champion battled with fuel pump issues early in the day and remained on the sidelines for much of the day. After the team fixed the problem, the Brit set the fastest time in the final minutes of the session, clocking a 1m18.861s on Pirelli’s new hard compound tyres.

Button was more than 0.8s clear of Australian Mark Webber, after the Red Bull also put in a number of flying laps towards the end of the session. Webber ended the day with a 1m19.709s.

Mercedes driver Nico Rosberg was eighth fastest but his day ended early with an electrical failure. The team pulled the pin on the day as it waited for new parts to arrive from its factory. New team recruit Lewis Hamilton will drive the car tomorrow.