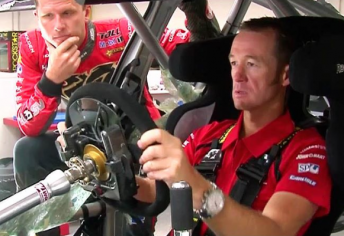 The Holden Racing Team has confirmed that Greg Murphy will drive with the factory Holden team in the Sandown and Bathurst endurance races later this year.

As first reported by Speedcafe.com in December, Murphy is set to suit up in HRT colours for the first time since 1998.

It has not been decided yet whether Murphy will partner Garth Tander or James Courtney, with much of that dependant on the future of Nick Percat at the team.

Courtney’s former endurance partner Cameron McConville confirmed on Monday that he was moving on to conduct the Driving Standards Observers role for the series, and with Percat an outside chance to claim one of the final seats in the V8 Championship, Murphy’s position in car #2 or #22 is up in the air.

Murphy, 40, enjoyed a seat fitting in Tander’s all-new VF Commodore yesterday, with Tander confirming that their different builds and height would not pose a problem for them to drive together, if required.

Murphy was left out of a regular drive this year after vacating his seat at Nissan-bound Kelly Racing. He will compete in a full V8 SuperTourers program in New Zealand.

The four-time Bathurst winner is a Holden loyalist, having taking his first Bathurst win with HRT in 1996.

“Life’s come a full circle and I couldn’t be happier, I’m back with the Holden Racing Team where it all started. To be part of the factory Holden team feels very right,” Murphy said.

“I didn’t want to be part of a (full-time) team that couldn’t provide a strong prospect of winning races, so the best option was driving in the enduros only with a team that gave me a real chance.

“HRT goes to Sandown and Bathurst to win. This is the best opportunity I’ve had to win those races in the past few years – this is the best place for me to be.”

The Holden Racing Team will unveil its new VF Commodore on Monday.