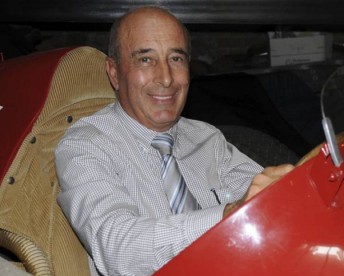 Four-time Australian Drivers’ Champion Alfredo Costanzo will race a Formula 5000 for the first time in more than 30 years at the 2013 Phillip Island Classic Festival of Motorsport from 8-10 March.

The CAMS Gold Star winner for the years 1980-1983 will drive the ex-Niel Allen McLaren M10B Chevrolet that was campaigned successfully by Kevin Bartlett in 1971 and 1972.

His race appearance at Phillip Island will be his first competitive track outing since he raced a Maserati in the 1998 Australian GT Championship and will mark the 30th Anniversary of his last Australian Drivers’ Championship title in 1983.

It will be his first Historic Racing event and he has had to apply to CAMS to renew his lapsed racing licence, although he has kept his driving hand in with advanced driver training in recent years. The year 2013 also marks the 50th anniversary of the McLaren Group, founded by New Zealand’s Bruce McLaren in September 1963.

The McLaren that Costanzo will race is chassis 400/019, which was purchased last year and has been restored by former Porsche agent and four-time Australian Hillclimb Champion Alan Hamilton.

Hamilton also acquired the identical ex-Niel Allen M10B chassis 400/002 that he raced in 1971 and plans to participate in limited motorsport events and track days in it once it is rebuilt.

Hamilton was Costanzo’s racing patron during his championship years under the Porsche Cars Australia banner, with his driver’s titles straddling the transition from F5000 to Formula Atlantic-based Pacific cars.

“They were beasts to drive,” said Costanzo, who just turned 70.

“They were certainly the most exciting cars I ever raced, as the technology was poor, but everyone was in the same boat!”

“I plan to enjoy my weekend. There will be a lot of familiar faces there, but perhaps fewer on the circuit!”

He expects to take part in four races for Formula 5000 and Group Q & R Racing Cars over the Phillip Island weekend, two on the Saturday and two on Sunday.

The highlight of the meeting will be the International Sportscar Challenge for a full 40-car grid of ‘big banger’ sports cars from the 1960s-1980s, with two rolling start races on the Saturday and a half hour mini-enduro as a feature of Sunday’s program.