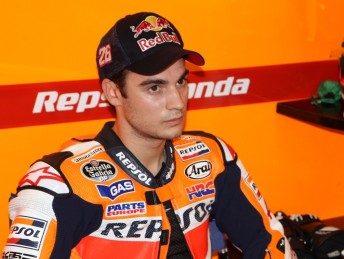 Dani Pedrosa has set the benchmark on the opening day of pre-season MotoGP testing at Sepang in Malaysia.

All the MotoGP prototype and CRT are present in Malaysia, including test riders from Yamaha and Honda making-up the numbers.

The Repsol Honda Team rider put the RC213V top of the time sheets late in the day. Yamaha Factory Racing’s Jorge Lorenzo had a final push with his new Yamaha, featuring a different chassis and upgraded engine to get within 0.008 seconds. Honda new-boy Marc Marquez making it three Spaniards at the top.

“We’ve spent three months off the bike and the feeling from the first day testing is positive,” said Pedrosa.

“The track was in good condition and we were able to put in a lot of laps at a good pace, thanks to it not being especially hot.

“We didn’t play about with the setup today, but we will move onto that in the remaining two days of testing.”

Valentino Rossi is showing that he’s coming to grips with his return to Yamaha in fourth, just over four-tenths off Pedrosa in fourth.

“After two seasons away I was able to come back on the bike and remember the good feeling I always had with it,” said Rossi.

“I am also happy because I was quite fast from the morning. We worked on the settings to make some improvements and we made some good steps. In the afternoon we started to work on the new parts for the season.

“It’s just the first test but the potential is high and I am in a good position, I am in fourth place but not far from the other three guys. I am very positive that we can improve over the next few days but I’m happy with the start.”

LCR Honda MotoGP’s Stefan Bradl, who is running the same spec RC213V Pedrosa had at the final round last year ended the day in fifth, just two tenths off Rossi.

Ducati has plenty of work to do with Nicky Hayden in 10th and Andrea Dovizioso in 13th.

Despite poor weather yesterday for running of the CRT bikes only, today’s weather was hot, but the rain stayed away.

After the dominant recent years of Casey Stoner, the only Australian taking part in the test is Bryan Staring who was 27th aboard the CRT Go & Fun Honda Gresini.

Testing continues at Sepang on Wednesday and Thursday.