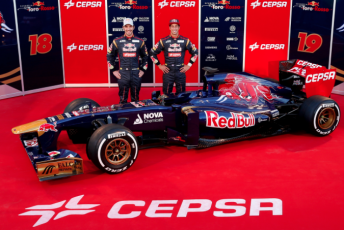 Toro Rosso is the latest Formula 1 team to reveal its 2013 Formula 1 race car.

The Italian team and its drivers Daniel Ricciardo and Jean Eric-Vergne took the wraps off the all-new Ferrari-powered STR8 on the eve of this year’s first test at Jerez, Spain.

With both Australian Ricciardo and Eric-Vergne retaining their rides in the Red Bull junior squad for 2013, the team is aiming to improve on its disappointing ninth in the constructor’s title this year.

Team boss Franz Tost says that his team is aiming for sixth in the constructor’s crown.

“It’s very emotional. The team has worked with a very high level of effort to come up with a great car and met the high expectations for this year,” said Tost.

“The goal is to finish sixth in the constructors’ championship. The STR8 is the first car under James Key and Luca Furbatto.

“Both drivers did a really good job last year, and I’m convinced if we supply them with a good car they’ll come up with surprise results.”

F1 cars will hit the Jerez circuit tomorrow, with Caterham and Marussia the last teams to unveil their new machines ahead of the test.

Williams has delayed its reveal of the FW35 ahead of the second test at Barcelona (February 19).