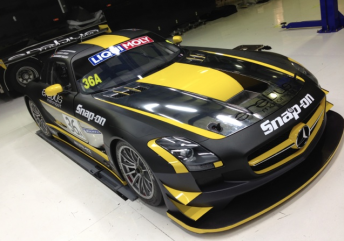 Erebus Motorsport has revealed its new look that will adorn its pair of SLS AMG GT3 Gullwings at the Liqui-Moly Bathurst 12 Hour this weekend.

The new look features a matte black livery, combined with chrome and a highlight colour on each of the cars – yellow for the Bernd Schneider/Thomas Jager/Alex Roloff entry, and purple for the Lee Holdsworth/Tim Slade/Peter Hackett SLS.

Erebus Motorsport’s general manager for its GT program Barry Ryan says that the idea behind ditching the chrome for black was about evolving the Erebus Motorsport identity, and achieving a faster race car …

“By removing the chrome wrap, we save a significant amount of weight from the car,” said Ryan.

“Under this year’s regulations we have a lighter minimum weight than we were running at last year’s Bathurst 12 Hour.

“We’ve gone all out this year in association with our partners at AMG Customer Sports to try and win the race. It has been a 12 month process leading up to this weekend and the design of the cars has been very much a part of that. We haven’t walked away from the chrome – it is still there, but we see this as an evolution.”

The two Erebus Motorsport cars will be part of a 50-strong entry list for the Liqui-Moly Bathurst 12 Hour.