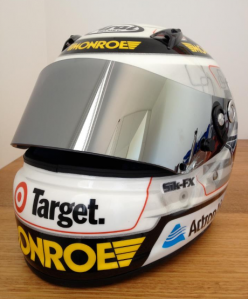 The #5 Ford Performance Racing driver has been recruited by Target as an ambassador, with the partnership originating from Winterbottom’s role in Disney Pixar’s Cars 2 movie.

The partnership will give Target customers a chance to meet ‘Frosty’ through appearances at various Target stores around Australia in 2013.

Target will become the home of exclusive ‘Frosty’ merchandise that will be available only at Target.

“We are really excited about this new partnership with V8 Supercars driver Mark Winterbottom, as he is such a well-respected, recognised and admired Australian sporting hero and has a vast supporter base,” said Dene Rogers, Managing Director, Target Australia.

“Mark is very popular with our customers, among adults and also, given his connection to Disney, he is a huge hit with children of all ages.”

Winterbottom finished third in the 2012 V8 Supercars Championship, as well as being awarded the Barry Sheene Medal. He is testing at Winton Motor Raceway today, alongside his new engineer James Small.

CLICK HERE for Speedcafe.com’s story on the engineering reshuffle at the factory Ford team.