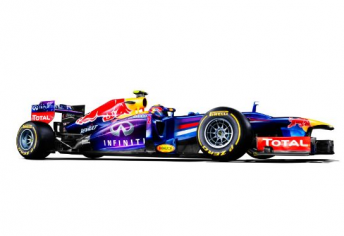 Red Bull Racing has revealed the RB9 that three-time world champion Sebastian Vettel and Australian Mark Webber will compete with in 2013.

The Milton Keyes-based team is aiming to secure its fourth consecutive drivers and constructors crowns in 2013, with Vettel become the youngest-ever triple F1 champion.

The Renault-powered RB9 features increased signage from Infiniti, with the manufacturer taking over as the team’s naming-rights backer.

Webber will be the first to drive the new car, with the first day of testing scheduled for Tuesday at Jerez.