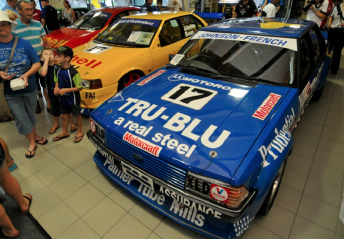 Dick Johnson Racing has been in the news over the past two weeks, and not for the first time, it’s for all the wrong reasons.

The legendary Queensland team is faced with financial difficulties leading into the 2013 V8 Supercars Championship. Since the final round of the 2012 title, the team will scale back from four cars to two, it has lost major sponsors Jim Beam, Norton and VIP Petfoods and, with less than two weeks before the official pre-season test, there is no clear direction on what shape the team will take this year.

Since news broke that new team investor Maurice Pickering had withdrawn from the team, Johnson and the management of his team have tried to kept a low profile.

In yesterday’s The Sunday Telegraph, Johnson spoke for the first time of their current hardship, stating that he is pushing as hard as ever to make sure his team is on the grid at the Clipsal 500 and avoid a potential $150,000 fine that comes with missing an event.

“We are going to fight until the death,” Johnson told The Sunday Telegraph.

“We are in a bit of a hole at the moment but we are doing our best to dig our way out. We are currently talking to a number of people and doing everything we can to replace the sponsors we have lost.

“Sponsors aren’t that easy to find even though we can provide a huge amount of value for them. We are going to be very fast this year and competitive and just need to get someone on board.

“We have won seven championships and three Bathursts. We are the longest-standing team and need to be part of the act. V8 Supercars would lose a lot of history if we weren’t around and we hope there is a sponsor out there for us.”

While the DJR team continues its race against time to secure its future, Speedcafe.com has taken a look back at the champion team’s glorious past.

The team’s first major successes came in 1981, with Johnson winning the 1981 Australian Touring Car Championship by fending off Peter Brock in a classic race at Lakeside.

Johnson won the 1982 and 1984 ATCCs, but arguably, his next iconic triumphs came in the early days of the turbo-charged Ford Sierras. Johnson secured back-to-back touring car crowns in 1988 and 1989, marking himself and his team as the sport’s most dominant force.

To top off that golden period, Johnson and his trusty Tasmanian team-mate John Bowe combined to win the 1989 Bathurst 1000, leading every lap of the race in one of the mountain’s most crushing displays.

The team’s next major win came in 1994. After struggling to match the pace of Mark Skaife and the Winfield Commodores during the ATCC, Johnson and Bowe fought back to claim the Sandown 500/Bathurst 1000 double.

The following year, Bowe scored his one and only Touring Car Championship win amid a season affected by the Kobe earthquake that rocked Dunlop’s tyre factory. The earthquake forced Dunlop teams to use different batches of tyres to get through the year, with Bowe prevailing over Bridgestone-shod Glenn Seton and Peter Brock.

DJR would have to wait six years to claim another heroic win – the 2001 Queensland 500 at Queensland Raceway. Steve Johnson and Paul Radisich ended the race in the sand trap after a freak storm, but the Shell Ford prevailed over the charging Castrol Commodore of Larry Perkins and Russell Ingall.

Another nine years passed before a big trophy was in the hands of DJR, with James Courtney winning the 2010 V8 Supercars Championship in the team’s 30th anniversary.

So what has been DJR’s greatest triumph in Australian Touring Car racing? Vote now on this week’s edition of the Pirtek Poll.