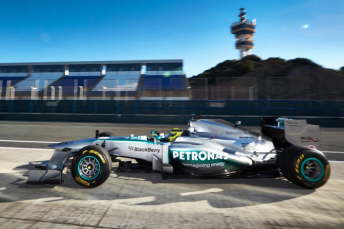 The Mercedes AMG Petronas team has taken the wraps off its W04 and is completing a shakedown test at Jerez today.

The team revealed the car for the first time and got straight to work at the Spanish circuit. Team driver Nico Rosberg has conducted the first laps in the car.

But while the car has had the covers come off, an official launch will be held in the afternoon.

The Mercedes team will have its first proper test on Tuesday.

Hamilton replaces Michael Schumacher, who has retired from the sport for the second time.

See below for video from Mercedes, looking at Lewis Hamilton’s first day on the job at the German team