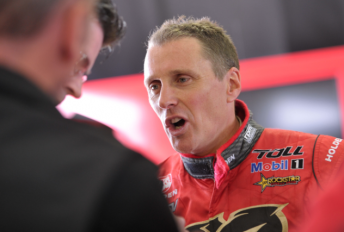 McConville’s position means that he relinquishes an opportunity to continue as a V8 Supercars endurance driver.

The former journeyman of the V8 Supercars Championship has turned his attention in recent times to Driving Standards Observer for Formula Ford, Carrera Cup and GT3 Cup Challenge.

After filling in for an absent Mezera at Winton last year, McConville has decided to take the role on full-time as Mezera turns his focus to his flourishing form on the senior’s golf tour.

McConville has kept his racing eye in by competing in V8 Utes and the Development Series, and while he says that it was a difficult to walk away from a chance to win the Bathurst, the timing was right.

“It wasn’t easy to walk away from more than a decade in V8 Supercars as a driver but I feel this is the right move into a new direction within the sport,” he said.

“I have been acting as a DSO for the past three years or so with other categories and this has allowed me to learn what this role requires.

“I really enjoy working in race control and although it’s quite a stressful environment it has a lot of similarities to the pressures of a race car.

“I’m enormously grateful for the privilege of having a long career behind the wheel at the highest level, now I’m excited by the next chapter and looking forward to new challenges.”

McConville has driven in the past two V8 Supercars endurance seasons with James Courtney at the Holden Racing Team. Greg Murphy has been tipped to replace McConville.