Chad Reed climbs back to fifth in Anaheim

Chad Reed climbs back to fifth in Anaheim 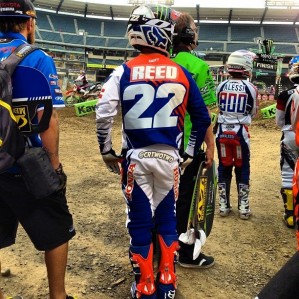 Chad Reed has bounced back from an opening lap melee to finish fifth at Round 5 of the AMA Supercross at Anaheim’s Angel Stadium.

It was a case of déjà vu for the Australian, who was solid throughout practice and finished his heat race third. Reed got caught up in a fracas at Turn 3 on the opening lap of the SX 450 Main Event which dropped him back to 19th.

Reed charged through the order, making up 14 positions on his way to finishing fifth. Acknowledging that tonight’s result doesn’t represent the progress made by his TwoTwo Motorsports team Reed said it was the first time this year that he felt he could win.

“I am honestly happy with tonight,” Reed said “Sometimes the result doesn’t always fit the progress you have made.

“I feel like we now have all the pieces of the puzzle and it was the first time this year I felt like I could win.

“Bring on San Diego, I know we are heading in the right direction and I really want to put it all together for a good result,” Reed added.