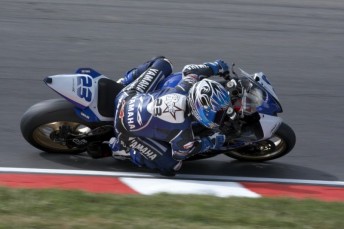 Broc Parkes will return to Australia this season

Former World Supersport front-runner, Broc Parkes will race in Australia this season after signing a deal to join the factory Yamaha Racing Team for the 2013 Australian FX Superbike Championship.

“I’m really looking forward to racing back at home and working with the YRT crew,” said 31-year-old Parkes, now based in Port Stephens. “While overseas, I always kept an eye on racing back here and the Yamaha Racing Team have always been the most professional off the track and had great success on it.”

Joining Parkes at the Yamaha factory team will be current Formula Oz Champion, Cru Halliday. Halliday will race in the 600cc division aboard an R6 Yamaha.

“I think the change to the R6 will be good and it provides a new challenge for me,” said Halliday. “The past few seasons I have been on the R1 and have had success, so now it’s my goal to take the same attitude into the FX600cc class and continue on with the good results.”

Team owner, John Redding is enthusiastic about his new combination.

“Signing Broc is a real coup for us,” said Redding. “He expressed an interest in returning to Australia and it worked out that we were able to make a deal happen. He is a world class racer with an enormous amount of experience on a wide range of bikes and circuits.”

“Both guys bring a vast amount of experience and knowledge to the table and also professionalism to their preparation that is needed to succeed.

“I think it’s a powerful combination.”

The first round of the Australian FX Superbike Championship will be held at Sydney Motorsport Park over the weekend of March 2-3.