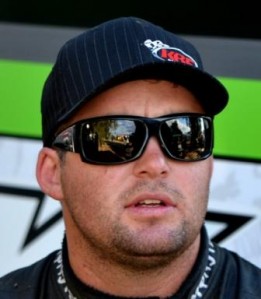 Whilst James McFadden holds onto his commanding lead in ENZED World Series Sprintcars at Adelaide’s Speedway City, he would trade anything for the victory that was taken from him by Steven Lines mere metres from the chequered flag.

McFadden was on for a lights to flag victory in the 30-lap A-Main that doubled as the George Tatnell Cup, but in style that George Tatnell himself would have been proud, Lines’ last lap highline choice proved to be critical. McFadden got caught on the lowline attempting to lap Trevor Green, only to see Lines’ Bridgestone car sweep past him with the chequered flag just 20 metres away.

The victory moves Lines into second place on the leaderboard.

“You always have to have a go,” said Lines. “Things are rolling our way right now and we were lucky enough to see the outside line clear up when James went to the bottom on the lapped car. We squeezed up the outside and snuck away with the win.”

High points man after the heats, Robbie Farr – a Speedway City specialist – came home in third placing and arguably had the best seat in the house for the up front fight.

He was followed home by a pair of Americans – Kyle Hirst in his final Australian appearance this summer and Shane Stewart, who earlier had a crash aboard the Monster Energy machine. He came through the B-Main and started the feature from 15th.

David Murcott’s run of unfortunate luck continued. He was running second before his right rear was filled with clay, this led to his car to handle poorly and then forced him into the infield.

Earlier in the night, Titan Garages’ racer, David Muir had an awkward rollover which saw the car land on its tailtank. Muir was taken to hospital with back pain, but was later released with nothing more than heavy bruising.

James McFadden leads the series by 208 points over Lines, with Shane Stewart close behind.

The next round of ENZED World Series Sprintcars, presented by Hog’s Breath Cafe will be held at Manjimup Speedway in Western Australia this coming Friday night.