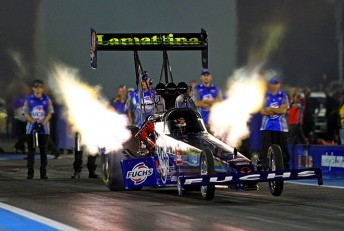 In hot conditions that continued over from Friday, Lamattina in the FUCHS/Elders dragster took the win over Damien Harris – his Friday night combatant – with a 5.49 second pass, whilst Harris suffered from tyre smoke – a far cry from Friday night’s wheel-to-wheel stoush.

“We need to be consistent and stay that little bit ahead all the time,” said Lamattina who hasn’t missed a final this season. “The other competitors have nothing to lose and that is a very dangerous situation because they are willing to take risks when we might be on the conservative side. We can’t be too conservative, when the opportunity arises we need to still lean on it.”

Despite top qualifying, K-Trans supported Darren Morgan had to settle for the B-Final solo pass and third placing for the round. In the difficult early evening qualifying heat, Morgan bested the five car field with a time of just 5.16 seconds.

In the elimination round, Lamatinna defeated strong local hope, Mark Sheehan – who could not take to the quarter mile, when his machine bizarrely burst into flames at the point of startup.

Harris took out Allan Dobson in his heat, Dobson’s car suffering two flameouts during the course of his runs. The team admitted that, despite the conditions being less than conducive to quick nitro times, they were chasing national record pace.

The next two rounds of the ANDRA Top Fuel season will be held across the Easter weekend with a similar format at Willowbank Raceway in Queensland.