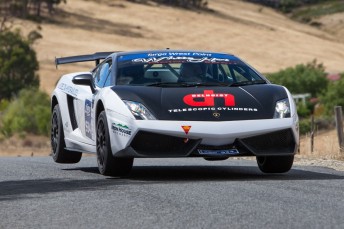 The Lamborghini driver finished 42 seconds clear of Matt Close in an Audi TT RS Plus, with Tony Quinn finishing third in modern, another 24 seconds back, in his Nissan GT-R.

White started the season with a win in Adelaide in August, but had a disastrous second round in Victoria, failing to finish after his Lamborghini experienced mechanical problems.

But his victory in Hobart puts the defending champion back in contention, with Targa Tasmania in April the final round and offering double points.

Quinn leads the championship with 178 points after finishing second to White in Adelaide and wining Targa High Country at Mt Buller.

Peter Rullo, fourth this weekend, is second with 162 points, Clinton Atentz third on 154 with White fourth on 135 points, up from 8th.

White’s form across the 14 stages and 208 competitive kilometres on the roads south of Hobart was superb. He started the second day 44 seconds clear of Close and immediately stretched his lead to 55 seconds, taking a clear 10 seconds on the opening Pelverata stage.

With victory his to lose, White eased off across the final six stages to arrive back at the finish line a comfortable winner.

In the battle for classic honours, Matthew Cardinaels was superb, not only winning the outright tile but also winning the Late Classic handicap competition in his 1972 Datsun 240Z.

Early Modern was won by Matthew Rickards, whose time in his 2002 Mitsubishi Lancer Evo 7 RS was bettered only by the top three modern cars in the 90 strong field.

White has won six of the last seven Targas, and he has now set his sights on Targa Tasmania in April.

“We came here with a win at all costs attitude,” White said of his championship aspirations. “It had to happen, and it was a must for us to do well here.

“After a few dramas yesterday we were pretty relieved to overcome them and get back to where we needed to be.

“It was smooth sailing for the whole day, and after we woke up this morning in the Pelverata stage, we felt very comfortable in the car after that. All the calls were coming out well, and we got all the apexes, so it’s been a good day.

“We kept pushing on pretty hard all day. Quinn and Close were having a big battle, and it’s easy for a 40 second lead to evaporate, so we get on it and it all went well.”

Showroom 4WD saw Scott Millar (Mitsubishi) and Ben Newman (Subaru) slugged it out over both days. Millar took the honours after a strong opening day, but Newman showed his development in the sport by narrowing the margin on the final day, eventually finishing 16 seconds behind.

The final round of the 2012/13 championship, Targa Tasmania, starts in Launceston on April 16, finishing in Hobart on Sunday April 21.