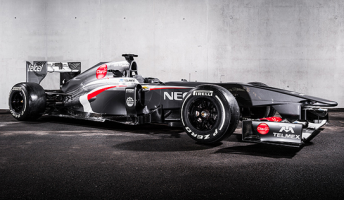 Sauber has taken the covers off its C32, revealing a silver livery for the 2013 Formula 1 World Championship.

Revealed at an event at its Hinwil headquarters in Switzerland, the new colours will represent a new driver line-up, with Nico Hulkenberg and promoted test driver Esteban Gutierrez replacing the competitive duo of Sergio Perez and Kamui Kobayashi.

Perez and Kobayashi produced a stellar 2012 season, taking four podiums, finishing sixth in the Constructor’s Championship and putting Perez in a position to secure the plum drive at McLaren.

The Ferrari-powered Sauber C32 is said to be an evolution of the successful 2012 chassis, according to team boss Monisha Kaltenborn.

“I’m very excited, but also a little tense,” she said at the launch.

“The aim is very clear and simple: we want to continue to improve ourselves.

“The Sauber C32 is based on its predecessor, which was a very competitive car.

Here is the video from the launch