Scott Pye has graduated to the V8 Supercars Championship

Scott Pye has been confirmed as a V8 Supercars Championship driver for the 2013 season.

After finishing second in his rookie V8 season in the Dunlop Series last year, Pye was confirmed as LDM’s first drive in his home state of South Australia, with the announcement made on the Clipsal 500’s start-finish straight, alongside Le Mans 24 Hour winner and South Australian Vern Schuppan this morning.

The driver of the second LDM Commodore has yet to be announced, although Dean Fiore has been heavily linked to the seat. 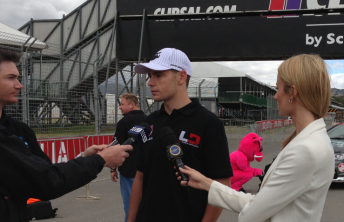 Pye drove with LDM in last year’s endurance races alongside Taz Douglas. The pair finished 24th in the Sandown 500 and failed to finish the Bathurst 1000.

Pye will continue his relationship with Dane’s Triple Eight team, as LDM is a customer of the champion team.

Check out the Foxsports News story on Scott Pye