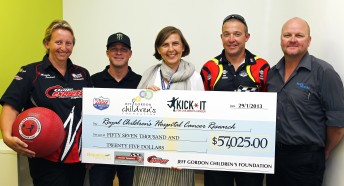 A total of $57,025 was raised for the hospital following a unique Kick It Down Under event involving some Aussie Speedway legends.

The money was raised during a two-hour Kick Ball game, the first held outside of the USA and with full endorsement of NASCAR star Gordon.

Participating in the Kick Ball game were an Australian team of Sprintcar drivers led by Brooke Tatnell who were up against a team of visiting US Sprintcar racers led by Shane Stewart.

The Jeff Gordon Children’s Foundation had raised more than $165,000 through previous Sprintcar-themed Kick Ball games that were staged at the Gold Cup, Chili Bowl and several other major races since the association started last May.

The first Sprintcar Kick Ball game was held at the Knoxville Nationals in 2012 and raised approximately $22,000.  It was $25,000 less than the Australian raised in two hours.