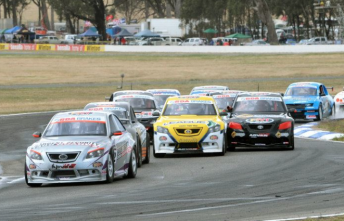 The Aussie Racing Cars at Winton

The Aussie Racing Cars has confirmed that Yokohama will remain the official tyre of its series for the 2013 season.

ARC has raced exclusively on Yokohama tyres since the inception of the category over 15 years ago, making it the category’s longest standing supporter.

“It‘s great to welcome Yokohama Tyre Australia back in 2013 as a major category sponsor and the official tyre of the 2013 Aussie Racing Cars Series,” said Category Manager Brad Ward.

“Yokohama has been great supporters of the series over many years, making this long-term partnership very important to us.

“We believe the Yokohama ADVAN AO48R tyre is the best product on the market and I know our competitors are excited about racing on Yokohamas again in 2013.”

The new deal will include prominent branding on all cars in the field, as well as co-sponsoring a team with retail tyre stores Tyres & More.

ARC and Yokohama management are currently reviewing the suitability of several potential drivers to become the official driver for Tyres & More entry.

The first round of the Aussie Racing Cars Super Series will be held in Adelaide, supporting the Clipsal 500.