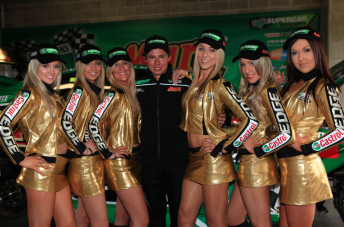 Cameron Waters will compete with Minda Motorsport in the Dunlop Series

Cameron Waters will contest the Dunlop Series with Minda Motorsport this year.

The 18-year-old will drive the team’s ex-Garry Rogers Motorsport Commodore that Elliot Barbour and Glen Wood drove in 2012.

The Victorian-based team will enter two cars in the series, with the second driver to be announced in the coming days.

The 2011 Australian Formula Ford champion enters the series with five Dunlop Series events under his belt, having contested one race in 2011, plus four events last year with Kelly Racing’s Dreamtime Racing initiative.

Waters has also driven in the past two Bathurst 1000s, finishing a credible 20th with Jesse Dixon in a Minda Motorsport-prepared Commodore.

Waters will test twice at Winton prior to the start of the Dunlop Series in Adelaide and says he feels confident he can run competitively from the outset.

“Last year was tough, we didn’t test and the program ended with three rounds to go, so this year will be my first full Dunlop Series program,” Waters said.

“The boys at Minda did a great job preparing and running the car for Bathurst and they now have a full year of experience at Dunlop Series level, which I feel sure will allow us to show pretty well.

“I want to be running in the top six and challenging for podiums from the minute we kick off at the Clipsal 500 and we will test at least twice prior to then.”

“We are delighted to welcome Cam to our team and proud that Minda has the opportunity to work with him,” Beasley said.

“From the first day we saw him at Formula Ford level we knew he was a star of the future and the job he did in the Shannons car at Bathurst last October just reaffirmed his talent, commitment and motivation.

“We have expanded our team to two cars for 2013 and will also work more closely with Garry Rogers Motorsport so I’m confident we will be able to challenge the front-runners and make a few people sit up and take notice.”

Round 1 of the 2013 Dunlop Series will take place on the streets of Adelaide as part of the Clipsal 500 event on February 28-March 3.