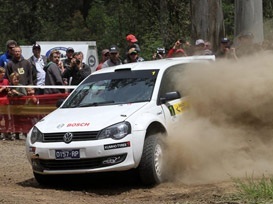 Michael Boaden, the last four-wheel drive champion of the Australian Rally Championship, has admitted he will be up against it at the opening round of this year’s title chase in Canberra with his new car yet to arrive in country.

Dowel debuted his VW at the final round in Victoria, while Boaden has been waiting his Polo from South Africa. Delays have meant the car originally due to depart for Australia prior to Christmas has only now recently left South Africa via sea freight.

The National Capital Rally is on 1-3 March.

“At this stage the car has only just left and isn’t due to arrive until the week before Canberra,” Michael confirmed.

“I can’t adequately explain to you the stress, not just on waiting for the car to arrive, but the whole prospect of having to learn a new car and a completely new way to drive.

“I know the car is capable, I just need to learn to get my head around only having two wheels pulling me through corners rather than four wheels shoving me through the corners!”

Having spent the vast bulk of his rally career in turbo-charged all-wheel-drive cars, the 2012 Champion said he’d considered looking at local front-wheel drive rally cars to give him some testing time, but opted against it at the last minute.

“I definitely thought a lot about it,” he said. “In the end unless you can replicate exactly what you’ll be driving for the rest of the year it didn’t seem like an option worth chasing.”

“Otherwise I might have been learning bad habits in a different car that would have put me worse off when I finally get into the Polo in Canberra.”

Despite the predicament Boaden is remaining optimistic and keeping his expectations at reasonable levels.

“I know we aren’t going to be on the pace of the Hondas or the Mazda. My aim, at least for the first Round, is to drive sensible and smart,” said Boaden.

“I know how good the car will be, and I think if it’s setup right, I’ll be able to put in a reasonable performance even if I am learning every stage kilometre I drive!

“But I think there will be a few others in the same boat, who have come out of four-wheel drives into new cars, so if I drive neat and tidy then I’m sure we can get some good results.”