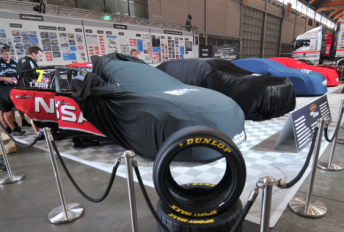 V8 Supercars’ fans will have to wait until the week of the pre-season test at Sydney Motorsport Park to see the majority of the 2013 V8 liveries.

With the Sydney test just 17 days away, only the look of Alex Davison’s Jeld-Wen Falcon FG has been revealed.

The reason for the delay for most cars is due to the release of the all-new VF Commodore.

Speedcafe.com understands that most Holden teams, which compromises 15 of the 28 cars in the field, will not receive the new panels for their race cars until the week of the test.

With the VF road car not expected to be launched until later in 2013, much effort has gone into keeping the look of the new car under wraps.

The VF roll-out will mark the first time in V8 Supercars history that a race car has been revealed before the launch of the road car.

The General’s factory squad, the Holden Racing Team, is set to play a leading role in the revealing of the latest generation machine, with and unveiling slated for February 11.

Holden’s other leading team, Red Bull Racing Australia (Triple Eight) is expected to be the first Holden team to test the VF. The champion team will turn laps on the 11th at a closed-to-the-public Queensland Raceway.

Red Bull will take the wraps off its new-look cars on the morning of February 14, ahead of the revealing of the Mercedes Benz AMG entry from Erebus Motorsport in the evening.

While the Holden teams are being forced to wait, Ford Performance Racing will kick off the major launches. The new-look Pepsi Max Crew FPR team will take the wraps off their Fords on the evening of February 7 in Melbourne, and at this point, the location of the new launch has been kept secret.

Nissan Motorsport will take the wraps off its two Jack Daniel’s and two Norton Altima L33s on Tuesday, February 12, in Melbourne.

Garry Rogers Motorsport is also set to reveal its coat of paint on the 12th, revealing its look during a test at Winton.

Both Tekno Autosports and Brad Jones Racing could not commit to a date when contacted by Speedcafe.com.