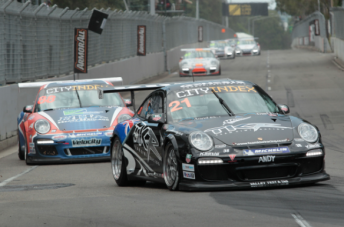 After entering the final two rounds of last year’s series on the Gold Coast and Sydney Olympic Park, the 22-year-old will take on a truly Trans-Tasman role, driving for the team from ‘across the ditch.’

While it might seem strange for a non-Kiwi to race for TKR, it is not the first time. When the team was involved in the V8 Supercars Championship, both Adam Macrow and Dean Fiore entered rounds under the TKR banner.

With Heimgartner moving up to the Dunlop Series this year, Davies takes over the TKR seat and says he is looking forward to the challenge.

“We were in talks with a few teams and wanted to lock something in reasonably early in order to be fully prepared for the long year ahead,” Davies said.

“I’m an Aussie through and through, but David’s 2013 campaign is structured around the Australian Carrera Cup Championship and I couldn’t be happier heading into the first event at the Clipsal 500 with my new team.

“I’ll soon be heading to New Zealand to conduct some testing and plan to do some more in Australia prior to the first round. I really want to be the best of the rookies, while challenging for the podium from the outset and feel that I can put my experiences from last year to good use.

“I’m stoked to be part of a category that is so professionally run and one where the playing field is so evenly matched and can’t wait to get stuck into it.”

John is equally enthusiastic about having Davies on board.

“Team Kiwi Racing is delighted to welcome Shae to the team as an exciting, young up-and-coming driver,” he said.

“I was impressed, as were many up and down pit lane, with Shae’s debut drive at the Gold Coast last season, and also with his follow-up drive during the final round on the streets of Sydney Olympic Park.

“I believe Shae has the potential to run at the front of the field in the near future, but right now it’s about using his last two Porsche races as a basis from which to move forward as a driver, both on and off track.”