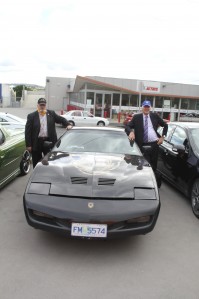 This weekend’s Targa Wrest Point will have a touch of Mad Max about it, with a former actor from the iconic Australian movie competing in a car made up to look like the black Falcon Interceptor which featured in the film.

Bertrand Cadart, the mayor of the Glamorgan-Spring Bay Municipality on the East Coast of Tasmania, who will drive a 1991 Pontiac Trams-Am Firebird GTA in the event, with Hobart Lord Mayor Damon Thomas as his navigator.

The Trans-Am is also similar to one used in the movie Smokey and the Bandit, starring Burt Reynolds, and the hit television series Knight Rider, starring David Hasslehoff.

Apart from reliving some of the Mad Max era, the mayoral pair will also be representing the Southern Tasmanian Councils Association and supporting the Common Ground Charity.

“We want to show Mayors are not people who live in ivory towers and are people who get involved in community events,” said Bertrand.

“We also want to raise at least $10,000 for Common Ground, which is a wonderful charity which provides supportive housing services to homeless people and more affordable housing for those in significant need.

“Now that they are living at Common Ground, we want to help them take the next step and provide them with the opportunity to achieve their personal and employment goals.”

Bertrand was involved in the motorcycle scene of Mad Max in 1980 and was contracted to design and modify motorcycles for the Mad Max film. 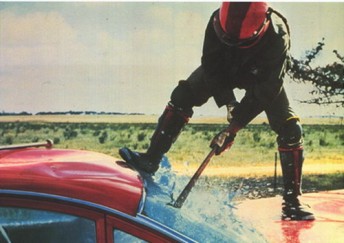 Bertrand Cadart in his smashing scene from Mad Max

He struck up a friendship with producer George Miller, who offered him a role in the movie, as the crowbar-wielding bikie villain, Clunk.

“I used to race motorbikes in my younger days and I think I’m a pretty good driver, but apart from that we don’t have any motorsport experience,” he said.

The pair will compete in the regularity section, in which entries are restricted to an average speed for stages and have to nominate an expected time for the stage, losing points for each second over or under their nominated time.

Targa Wrest Point, the third round of the CAMS Australian Targa Championship, will be held on Saturday February 2 and Sunday February 3.