V8 Supercars team owner Kim Jones is recovering from a serious road car incident that he was involved in recently.

Jones suffered three broken ribs and a broken sternum in an accident in Albury where a Volvo driver pulled out of a sporting complex car park into Jones’ on coming utility.

The 50kmh impact wrote off both cars. The driver of the Volvo involved was not injured.

As his Brad Jones Racing team continue to build its three race cars for the 2013 season, Jones says that he has been on light duties since the incident.

“Both cars are written off, and I was only doing 50kmh. I could hardly believe it had happened. I was not expecting the crash at all. It happened so fast, I didn’t even brake. The first thing I knew was the airbags were deployed and I had a damaged car. 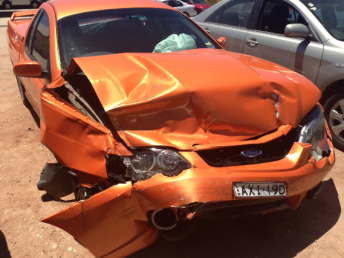 “I’ve had broken bones before, and maybe I’m, getting old, but it bloody hurt.

“And much to my wife’s amazement, it definitely wasn’t my fault!”

While Jones recovers from his road accident, he says that business at BJR remains at full steam. Having tested the first team’s first Car of the Future Commodore at Winton two weeks ago, the team is now close to completing the build of its second car, which is expected to be shaken down at the Motorsports Training Australia facility at Wodonga TAFE on Friday.

The third car will be ready in time for the team’s final test at Winton on February 11, prior to the all-in V8 Supercars test at Eastern Creek on February 16.

“The guys are very, very busy and about to finish second car,” Jones said.

“The staff are working unbelievable hours to achieve what we need. It’s full credit to their dedication.

“We were very happy with what we did and what we achieved at the first test. The car did what we expected, and we’re looking forward to the next test where they’ll be other teams on the track and we’ll have some yard sticks.”