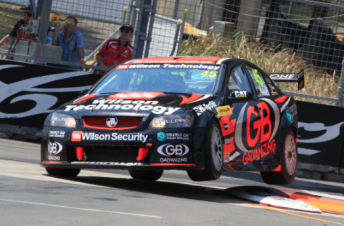 Dale Wood will have his best-ever chance of success in the Dunlop Series after signing with Matthew White Motorsport this year.

The Victorian has secured a plum drive in the ex-Will Davison Ford Performance Racing Falcon FG that set the most pole positions in last year’s V8 Supercars Championship.

Confirmation of Wood’s drive follows the huge industry news that two-time MotoGP champion Casey Stoner will drive for Triple Eight in a Red Bull/Pirtek-backed Commodore VE in the Dunlop Series.

Wood finished sixth in last year’s championship, driving for Greg Murphy Racing. Wood ended the year with a flurry of strong results, including two podium finishes at Winton and Sydney. He also drove with Tony D’Alberto in the V8 endurance races.

With continued backing from GB Galvanizing, Wilson Security and Strategy One, Wood says that he will have his best chance of success in the development series.

“I’m pumped. It’s the best opportunity I’ve ever had in the series,” Wood told Speedcafe.com.

“There is no question that the car I’m in is one of the best going around. It finished fourth in last year’s championship and proved to be the fastest on a number of occasions. Team-wise, Matty White runs a very good show, he’s always near the point end, and it was only a couple of years ago that he won the championship with Jonathon Webb.

“I’ve only got one goal, and that’s to win the championship and to be challenging for wins and podiums every round.”

MWM will campaign three cars in the series, with one of the seats also locked in for Morgan Haber.