Chip Ganassi Racing has claimed a fifth victory in its 10 years of competing at the Daytona 24 Hours with Juan Pablo Montoya driving through to the lead in a thrilling final hour.

In that fight was the team which included Australia’s Marcos Ambrose who charged back from being eight laps down early.

The Ganassi Riley-BMW MkXXVI was the dominant car of the race with Scott Pruett, Memo Rojas and Charlie Kimball dominating from their pole position and never fell seriously further back than fourth place in the race. 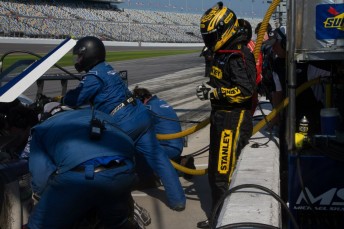 Ambrose waiting to get aboard the Riley-Ford. PIC: Andrew Hall

That included the last re-start inside the final hour of the race, when Montoya took third from AJ Allmendinger’s Michael Shank Racing Riley-Ford, then second from Joao Barbosa and finally the lead from Max Angelelli in the Wayne Taylor Racing Dallara-Chevrolet DP01.

The lead Ganassi entry then pulled away to win by 22 seconds from Angelelli, Jordan Taylor and Ryan Hunter-Reay entry.

Allmendinger suffered broken left-front steering arm in the first hour of the race, from that point the crew went on a charge. Ambrose and Wilson the standouts as they used their speed plus clever tactics to get wavearounds during safety car periods. Ambrose putting in double stints at the wheel before the car back over to Allmendinger in the lead after his final stint.

“I had a blast racing against the best sportscar drivers in the world, but I’m whipped!” said Ambrose.

“This team did not quit. We were eight laps down at one point and got back on the lead lap.

“My stints were pretty good and over night and in the morning I got back four laps with the race format. Things went very smooth and we worked the traffic really well.

“As the sun came up the track started to suit our car and we were able to really get ourselves in a position to challenge for victory.

“I have to thank Mike Sank Racing – this is a world class race team and although we didn’t win it we can all feel proud of what we achieved.”

Their fight for victory ended after an off-road excursion when Allmendinger tried to overtake Barbosa, this resulted in an unscheduled pitstop to clean out the radiators. Barbosa, who shared his Action Express car with Mike Rockenfeller and Burt Frisselle, finished fourth after he had to serve a drive-through after the incident.

Check out the interviews with Ambrose during the race