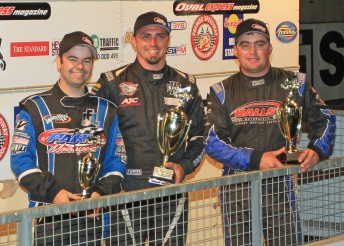 American Tim Kaeding has pulled off a stunning last lap pass to take the honours on a thrilling night one of the Grand Annual Sprintcar Classic at Warrnambool’s Premier Speedway.

Kaeding took victory in the 25 lap Australia v America Challenge with a bold pass on Steven Lines on the final lap.

It left the American celebrating wildly with the $6,000 winner’s cheque, but Lines – who won the Classic in 2011, was inconsolable after giving up what would have been a flag to flag win.

“This is awesome,” screamed Kaeding after emerging from his Krikke Motorsport machine. “This is my first win for the summer, and it couldn’t have come at a better time, or a better venue.”

The final lap pass capped off a spectacular opening night’s racing for the 41st edition of the Classic.
Despite cool and windy conditions, a capacity crowd saw a bumper field of 103 line up for the event.

The racing at times was sublime on the blisteringly fast and slick circuit. There were times throughout the night when racing was three and four wide.

The quality of the competition meant the likes of Brooke Tatnell, Ian Madsen, quick time winner Luke Dillon, and newly crowned Australian champion James McFadden, all had to qualify through the B-main. It was McFadden’s first B main of the season.

The night turned sour afterwards for both Tatnell and Madsen, who both rode out nasty crashes during the feature, both with heavy repairs ahead just to make night two of the event.

Earlier heat 10 took out a number of big stars. Garry Brazier was about to take the white flag when he was caught up in a wicked four car crash. Instead of taking the win, he was sent flipping down the main straight with Aiden Gee. American Danny Smith and Brad Warren also had extensively damaged cars in the wreck.

Controversy is always aplenty at the Classic. That came in heat 12 when 4 time Chilli Bowl winner Kevin Swindell – on debut in Warrnambool – almost came to blows with David Murcott after both came to grief on the track. Swindell had extensive front end damage, while Murcott was sent upside down.
“It was stupid,” Swindell said of Murcott’s driving. “He drove over the top of me and ruined our weekend. I was busting my ass to make this work.”

Another 16 heat races await tomorrow night, ahead of the E, D, C, B-main, and then the 40 lap, $30,000 to win Classic, deemed the most prestigious title in Australian speedway.