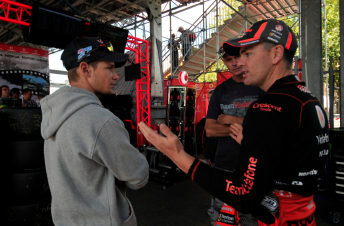 Casey Stoner has confirmed that he will compete in the Dunlop Series this year, driving for champion team Triple Eight.

The Sunday Telegraph has revealed one of the worst kept secrets of the V8 off-season, with the two-time MotoGP champion outlining his plans to contest the entire Dunlop Series in a Red Bull-backed Commodore VE.

“It is a trial year to see how I go and how I like the sport,” Stoner told The Sunday Telegraph.

“We are definitely making a commitment to it, but at the same time we don’t want to go too deep in case it is not for us.

“I was going to do 75 per cent of the races, but I have decided to do them all.

“I want to get as much time in the seat as I can and try to understand what it is like to drive a V8.”

Stoner has also hinted that he’d like a shot at this year’s Bathurst 1000.

“I doubt anyone would want me at Bathurst, but I am not ruling it out,” Stoner said.

“It is every Aussie’s dream to drive there.”

In an extensive interview, Stoner also says that he would consider returning to MotoGP in the future.

A team statement confirmed that Stoner will use the #27 plate on Triple Eight chassis 888-028, which won the 2010 Supercheap Auto Bathurst 1000 in the hands of Craig Lowndes and Mark Skaife.

Lowndes drove the car throughout the 2011 V8 Supercars Championship before it sat in the team’s workshop as a spare throughout last year.

It is the same car that Stoner himself drove at Paul Morris’ Norwell, Queensland, driving school in December, 2011.