Robbie Farr opens his 2013 account at the King’s Challenge

Robbie Farr opens his 2013 account at the King’s Challenge 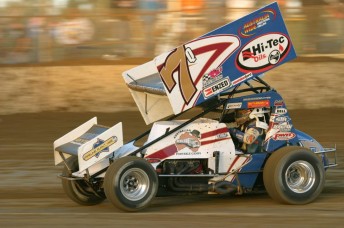 McFadden advanced for third and was in a position to challenge Farr, before the pair got perilously close to touching one another.

Farr was able to maintain the lead and take the win. He started the race from the pole position with David Murcott alongside.

McFadden, who started from position three, was able to keep his running battle of recent times with Murcott going as he got past him into the runner-up position.

Murcott rounded out the podium from a hard charging Steven Lines, who came from sixth on the grid.

American, Jason Sides rounded out the top five and was the best placed of the World of Outlaws competitors that made the trek to the home of the blue lake.

Todd Wanless, Leith Ahlfors, Aidan Gee and Nick Lacey tagged onto the back of the last chance qualifier from the C-Main – a race that saw Kevin Swindell end his night, also diminutive American, Rico Abreu and Wayne Johnson among others.

The cars that raced last night will take the drive a couple of hours east to Warrnambool for tonight’s opening night of the Lucas Oils Grand Annual Sprintcar Classic, where 101 cars will set a new record for the event.