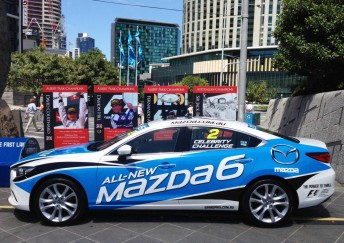 The latest version of the Mazda6 Celebrity Challenge race car has been revealed at F1 World – an interactive Formula One display – at Queensbridge Square, Southbank, and follows on from the latest confirmed celebrity starter, Ruby Rose.

The Snow Flake White Pearl Mazda6 Celebrity Challenge car was the second to be revealed, the first being a Soul Red version which featured alongside Rose.

Rose not only gets the opportunity to race in the Mazda6 Celebrity Challenge, but she was also the first of the announced celebrities to see the Mazda6 in full race mode. 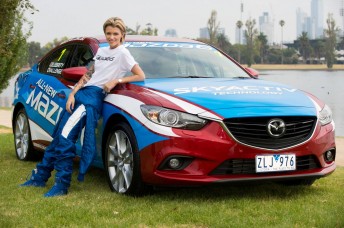 “Last year I took up competitive boxing and if I can channel that into the racing, not the violent stuff of course, then I’ve probably got a pretty good shot,” said Rose.

“I want to beat everybody because I always want to be number one, but really everyone with a Gold Medal I expect to come in front of me.”

The red and white Mazda6 Celebrity race cars are the first to be fitted with roll cages and race harnesses.

With two further colours still to be announced, the 20 celebrities involved in the Formula One support event are set to stand out aboard the identical Mazda6 SKYACTIV-D 2.2 litre diesel cars.

“Our plan was to come up with a race livery that complemented the Mazda6’s KODO – Soul of Motion design theme which made the cars stand out and I’m confident that we’ve achieved both.

“We’re now very close to having our full roster of 20 confirmed celebrity drivers and with less than 50 days until the start of the Mazda6 Celebrity Challenge, we’re looking forward to going racing.”

Confirmed drivers for the 2013 Mazda6 Celebrity Challenge include: