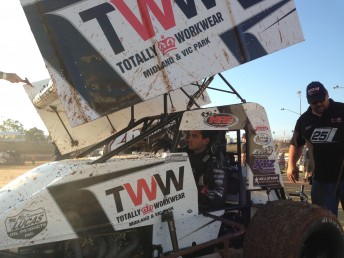 James McFadden will be one to watch at Warrnambool

Perfect weather conditions have greeted the bumper field ahead of tonight’s opening to the 41st Grand Annual Sprintcar Classic at Warrnambool’s Premier Speedway.

Despite a forecast for overcast conditions and rain, brilliant sunshine is warming a capacity crowd at the seaside venue.

A record field of 101 cars is crammed into the pits preparing for time trials which are set to begin a the earlier time of 5pm. In a stacked night of action 16 heats will follow time trials before the opening night feature, the Australia America Challenge.

With Monday a public holiday, crowds are set to reach record capacity with all accommodation fully booked in the town. Club officials are expecting a crowd approaching 20,000 across the two nights for the most prestigious prize in Australian speedway.

“It’s probably the best field they have ever had with how man Americans there are.”

There’s a record 18 Americans entered for this weekend’s Classic.

The day began with an enormous crowd at the traditional Fan Appreciation breakfast at the Flying Horse Bar and Brewery, attended by the majority of the star drivers.

This weekend is set to be the last two night Classic, with the Premier Speedway club set to expand to a three night event next year due to the growing car count.

Fresh from his win at last night’s King’s Challenge in Mount Gambier, Robbie Farr mirrors most in the field ahead of the Classic.

“I would do a double pike backflip if l win,” Farr told the Warrnambool Standard. “It’s the race that has eluded us over the years, there will be some sort of celebration if we win.”