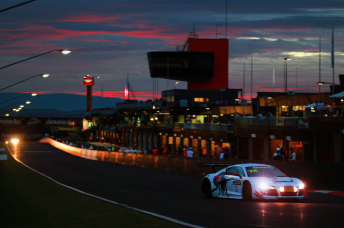 Shane van Gisbergen is one of a number of V8 Supercars drivers set to compete in the Liqui-Moly Bathurst 12 Hour next month.

The Kiwi, who backflipped on his plan to quit V8 Supercars and return with Tekno Autosports’ Holden team, will drive a Porsche GT3R alongside Tony and Klark Quinn.

The drive will be the beginning of a new relationship between van Gisbergen and the Quinns, as their family’s business VIP Pet Foods will support van Gisbergen’s V8 drive with Tekno.

It will be ‘The Giz’s’ first start in the ‘once-around-the-clock’ race.

Van Gisbergen’s name is one of a number of stars on the Liqui-Moly Bathurst 12 Hour entry list, set to be released later today.

Other V8 Supercars drivers pencilled in for the race include Brad Jones Racing trio Jason Bright, David Wall and Dunlop Series driver Andrew Jones. The BJR drivers will spearhead the two factory RCZ Cup models in the Invitational class. Bright will team with French drivers Stephane Caillet and Julian Ruefen, while Jones and Wall will partner with experienced Sportscar ace Bruce Jouanny in the second car.

The drivers mentioned above join V8 legend Craig Lowndes and his Red Bull Racing Australia endurance team-mate Warren Luff, who have already been confirmed for their return attempt at the 12 Hour in a Audi R8.

The Bathurst 12 Hour will be held on February 8-10 and will be broadcasted live on Speedcafe.com. CLICK HERE for all of the up to date news on next month’s race.