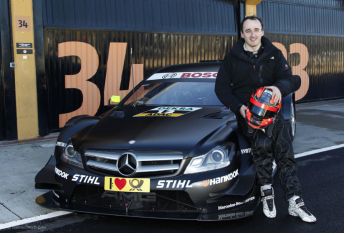 The Polish Grand Prix winner logged 114 laps in the AMG C-Coupé in what was his first drive of a high downforce car since his near-fatal rally accident in February 2011.

Due to his extensive rehabilitation, Kubica has had limited driving chances, but has been able to conduct some rally tests as he aims to compete in the European Rally Championship this year.

Despite rain affecting the test, Kubica enjoyed the outing and produced some respectable lap times.

“I felt very comfortable in the car, even though after my long break it meant adjusting to the high downforce that a state-of-the art DTM race car produces,” Kubica said.

“I’m very pleased with my performance on this first day of DTM testing and had no problems whatsoever in the car.”

“The first installation lap was in the dry, then a few heavy showers of rain came down and we had to wait for the track to dry out.

“All in all, it was a good experience, getting to know the car in different weather conditions.”