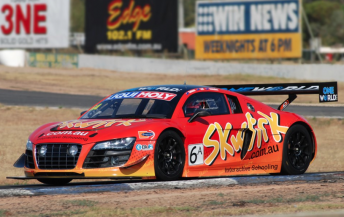 The car that Craig Lowndes will compete in at next month’s Liqui-Moly Bathurst 12 Hour has been revealed at Winton Motor Raceway.

The Audi R8 LMS Ultra, to be driven by Lowndes, Warren Luff and Rod Salmon, will feature backing from Skwirk.com.au and One World.

The car tested at Winton yesterday, with Luff and Salmon competing the driving duties while Lowndes in overseas contesting the Monte Carlo Historic Rally.

Salmon will contest the entire Australian GT Championship in the Audi, including the first hour of the 12 Hour which counts as the opening round of the championship.

The look of the #6 Audi follows the news this morning that German superstar Bernd Schneider will compete in the Bathurst 12 Hour, driving in an all-star line-up for Erebus Motorsport.

The full driver line-up for the Liqui-Moly Bathurst 12 Hour will be revealed this afternoon.

Check out the video  of Luff testing at Winton